Prema, near Dursley in the Stroud valleys, offers an affordable day out for all folk in the South West. 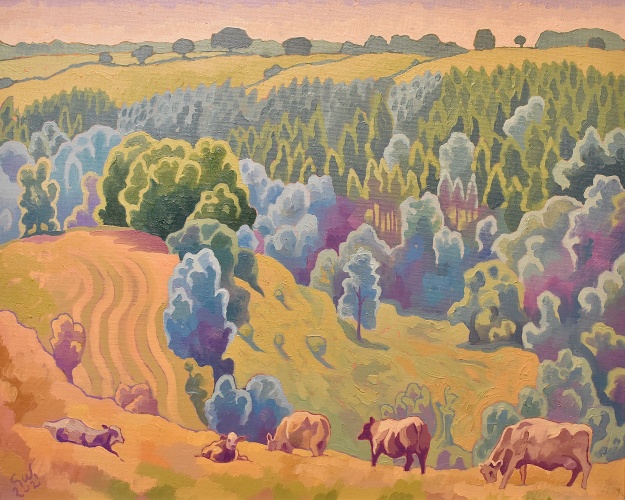 Guy Warner is a self-taught landscape painter working from his home studio in Winchcombe. He produces vibrant depictions of his local landscape, working mainly in oil on canvas.

Guy was born in Birmingham in 1985 and he has been drawing and painting all his life. His career selling landscape paintings started in his teens, with little formal training, and has continued ever since. A move to Gloucestershire in his twenties and the opportunity to immerse himself in the opulent greenery of the Cotswolds absolutely confirmed his fascination with and dedication to the rural landscape.

His creative process begins the moment he sets off along a footpath, leaving the town behind to enter the lush, green embrace of nature.

Guy explains “One remarkable feature of the Cotswolds is that it is often possible to find a view where the modern, industrial world is absent so the imagination can take hold and one’s sense of time is lost.”

Guy’s work explores the relationship between the hard lines of the manmade, in the form of tracks and buildings, and the billowing softness of vegetation on an ever expanding scale, from cow parsley heads through shrubs and trees to towering clouds. The link between these natural forms is of great interest; the way sheep reflect clouds and clouds mirror trees and the umbels of cow parsley, hogweed and wild carrot have echoes of all three.

Guy’s paintings occupy a space between reality and the fantasy, where nature threatens to overtake the human world, rather than the other way around. More often than not, he removes details such as road signs or electricity pylons as they clutter a scene.

The most distinctive element of Guy’s work is the limited colour palette; influenced by various sources starting in France with the impressionists, post impressionists and fauves. His style, however, has been most influenced by the continuation of the above movements in the British art scene, most notably the Bloomsbury Group and the various poster artists of the 1920s and 30s.

For his exhibition with Prema, guy’s paintings will be in our Upstairs Gallery and in Vestry Café we’ll have framed prints.

Prema, near Dursley in the Stroud valleys, offers an affordable day out for all folk in the South West.